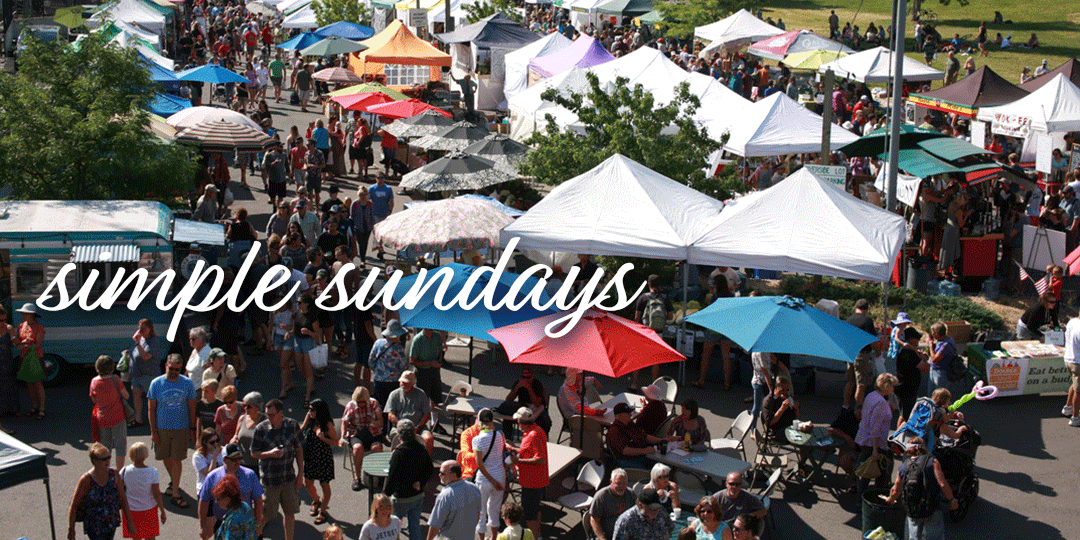 Oh, Montana. I didn’t know much about Montana before this trip; well, really until we arrived here. Some assumptions I had were right. I have seen a few old men with huge belt buckles and white T-shirts tucked into their jeans. We’ve seen plenty of cattle and horned sheep crossing the road.

The stars are incredible, and the sun doesn’t set until 10:30pm.

Last Saturday (I think), we left Idaho for Missoula, Montana. We’ve spent this past week at a few different locations all within 30-45 minutes of Missoula. It’s been amazing.

I think in last Sunday’s post I mentioned we were at our second Boondockers Welcome spot. We ended up staying a few nights there, and it was wonderful. Not only was the location great for Luke to go fishing, but the view from where we were parked was so peaceful. Not to mention our hosts were probably the nicest people you’ll ever meet. I’m not kidding. They were so sweet to us while we were there, and then they sent us on our way with homemade caramel, basil, fresh out of the garden garlic, honey, and glasses for the solar eclipse in August.

Part of the wonderful thing about this trip is all the people we’ve met along the way. Whether they were parked beside us for a few days or we met via Instagram or Boondockers Welcome, new friends always seem to come along at the perfect time.

Sometimes it’s just grabbing a drink and chatting with fellow full-time RVers, or a place to park and hook up to electricity (for free) just because they have a heart of gold, or a delicious home cooked meal that isn’t one of the five things we always eat, or letting us borrow some tools to fix something on the RV. I don’t think either of us expected we’d meet so many great people that we would stay in touch with. 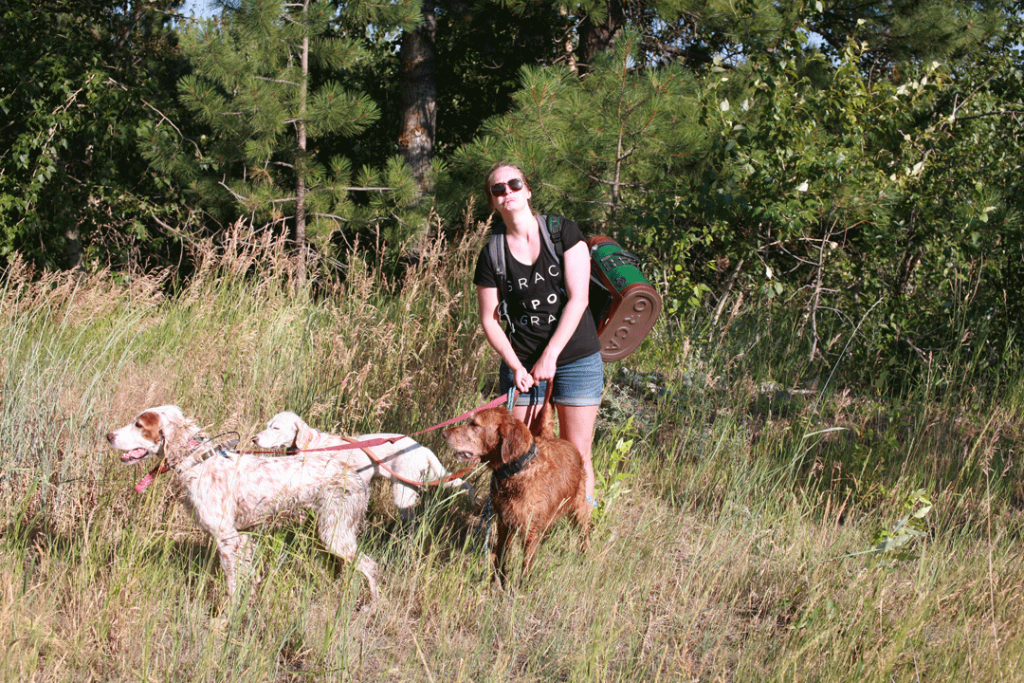 A few days into our stay just south of Missoula, we decided it would be a good idea to get the dogs out on the river. We were wrong. We were very wrong. We pulled up to a small river fishing access and planned to walk down to the river, throw the ball for the dogs and let them swim. Sounds simple, right?

So we headed down the trail, in flip flops, thinking this was just like all the other river accesses we have been to. A few minutes later we reached a point on the trail that was pretty steep and with a three dogs and a cooler. It didn’t seem like the best idea, but we pushed forward anyways. We made it to the bottom with minimal cuts and scratches to find we had to cross a small muddy ditch to get to the river. Perfect. Nothing like a little mud bath before the river.

We made it past the ditch and then realized we had to climb down another relatively steep hill. At this point we were too far into the process to turn back. Going on the hill all three dogs ran ahead of us to the river. Well, by the time we made it down the hill, we both heard Max struggling to swim. So Luke rushed over the little island to see what was happening. When he made it to the other side, he found Max struggling to tread water in heavy current and Winnie swimming about 100 yards down river. He jumped in and grabbed Max, put him on the island and then swam down to grab Winnie. Winnie wasn’t struggling to swim, but she was totally focused a flock of geese down the river. Awesome.

By the time Luke had grabbed Winnie and started making his way back, both boy dogs jumped in again. All three dogs have been swimming at home, so it was really confusing as to why Max was struggling so much. I guess he just isn’t cut out for river swimming. So now I have to jump in and grab Max as he is trying to swim against the current but only getting pulled away. I reached him, but I couldn’t touch so we both went under for a second. Keeping his goofy face above water, we finally floated down to a tree sticking out far enough to grab on to. All the while Hudson is just swimming in place in the middle of the river – not good.

After this whole fiasco, I have Hudson and Max back to the island, and Luke is swimming back across with Winnie. When he hopped back up on the island, he noticed his toe was bleeding pretty bad. Somewhere in the process he broke and sliced open one of his toes. We will spare you the picture. I decided it was best to pack it up and head back. We made it back in one piece, but with about 100 new mosquito bites.

After all this, the drowning dog, the broken toe, the cuts from falling down the hills, the 100’s of mosquito bites, we were glad to be back in the car. But, hey, everyone has their bad days.

On Tuesday, we moved to Beavertail Hill State Park. It’s about 25 minutes from downtown Missoula and right on the river. We set up camp here for four days. We could run the AC for the dogs, fish nearby, and we had great cell reception so we could get some work done. 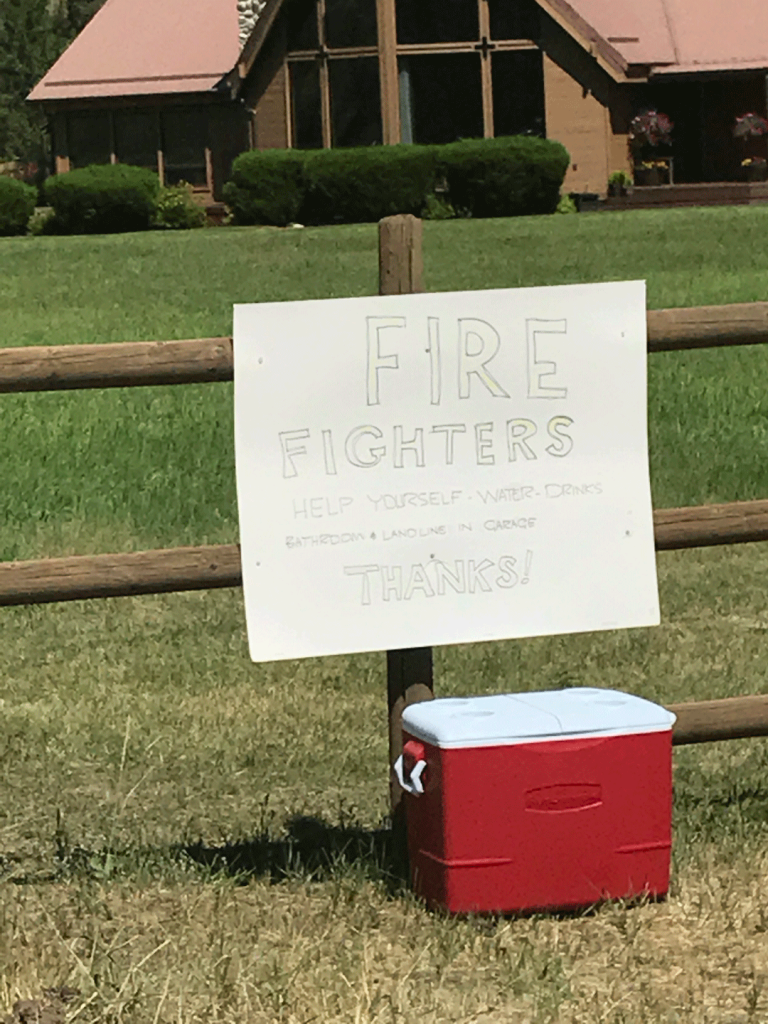 Did I mention Montana people are the nicest?

One not-so-great thing – there is a wildfire not too far away. Close enough that it’s pretty smoky when the wind changes, but far enough way, that it’s not a threat to our campsite. Hopefully, that stays the case because we’ve moved back to Beavertail today for a few more days. 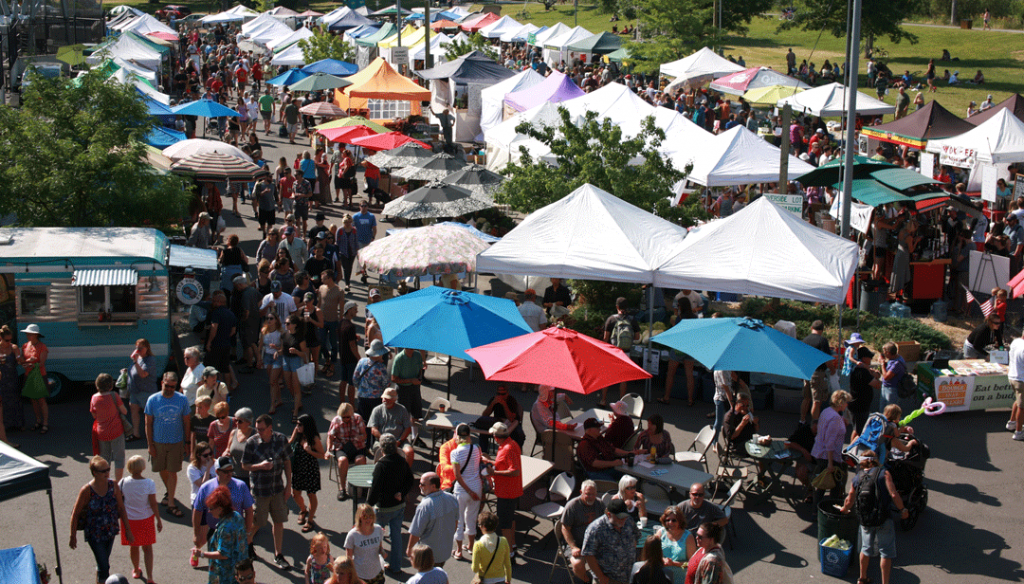 Missoula is a pretty great place – even their laundromat is great, and we’ve been to our fair share on this trip.

On Thursday, we went into Missoula to take care of “normal” things – laundry, pick up the mail, run some errands. Then we met up with a couple who used to live in Wilmington and hung with them downtown. If you travel full-time, try your best to find someone from the area to give you recommendations on things to do, local restaurants, etc. To steal a line from Bend, OR, it’s the quickest and easiest way to “visit like a local.” 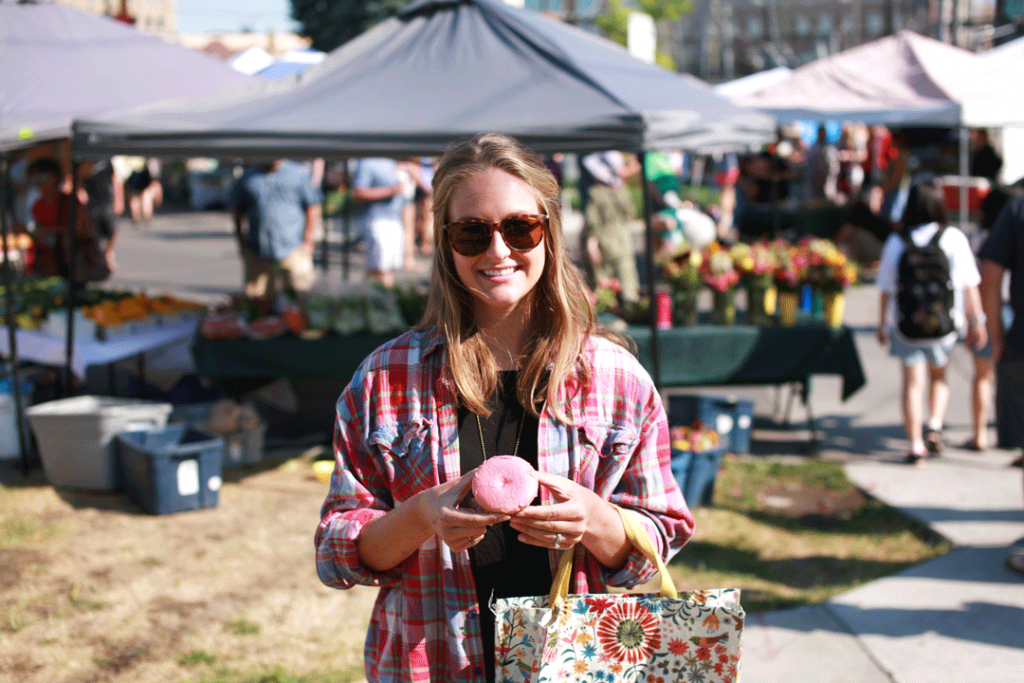 If you’ve never tried to find a good gluten free donut, then you have no idea how exciting this was. 🙂

Saturday morning we headed back to downtown Missoula for the farmers market at Caras Park where we finally tried huckleberries. Everywhere we’ve gone there’s huckleberry smoothies, huckleberry ice cream, huckleberry soda… it’s a real thing around here. We left the famers market with a bag of huckleberries, heirloom tomatoes, a gluten free lavender donut with raspberry icing (first ‘real’ donut I’ve had in years – thanks celiac), and some crazy cinnamon roll for Luke. I wish we were going to be here next Saturday so we could go back (and get another donut)!

After the famers market, we moved the RV to Bearmouth RV Park. We had to empty the tanks, and Beavertail Hill was already booked for Saturday night. We don’t stay in true RV parks often, but most of them have real-full-sized showers. Trust me, after you’ve spent over a month using an RV shower and trying to conserve as much water as possible, a normal shower (without inconsistent temperatures, a timer or if-y water pressure) is 100% worth the RV park prices.

Saturday night, we went back to downtown Missoula for a BBQ festival – I had huckleberry wine. We had “not Carolina BBQ”, but it was still good.

After moving the RV and before the BBQ festival, we took the suggestion of the gluten free donut baker and went out to find Nimrod Hot (cold) Springs. Nimrod Hot Springs is literally right off the highway between the Bearmouth exit and Beavertail Hill exit heading west. 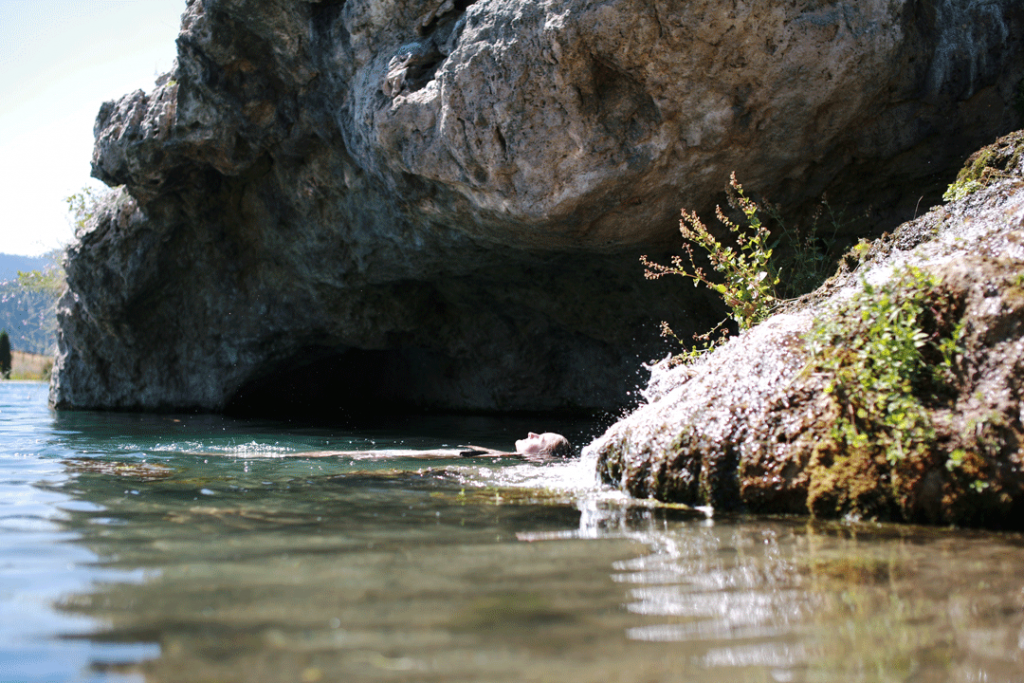 So there were spots in the spring near the cave and little waterfall situation that we’re beautiful, but it is right off the highway. It was our first hot spring of the trip, so our standards aren’t too high. I imagine it’s not the most relaxing spring, but it was fun to jump off the side and swim around for a bit. One of those cool things if you have extra time, but not a Missoula bucket list item – in my opinion.

All-in-all we had a fun filled Saturday and are looking forward to the rest of our time in Missoula before heading toward Flathead Lake this weekend.

We want to know: is there anything we can’t miss before leaving Missoula? Any suggestions for Flathead Lake while we’re planning our itinerary? Let us know in the comments.